‘All of my children have spoken for themselves since they first learned to speak, and not always with my advance approval, and I expect that will continue in the future.’ – New York Post, 13 August 1974.

“As we read the school report on our children, we realize a sense of relief that can rise to delight that – thank Heaven – no one is reporting in this fashion on us.” Reader’s Digest, June 1964

A funny thing is happening in the lead-up to the 2019 federal election: young people, a traditionally apathetic mix of first-time voters and too-young-to-be-voters, are disrupting the conventional narrative.

The youth enrolment rate is at an all-time high of 88.8%, and evidence shows that in contrast to earlier generations, millennials are not becoming more conservative as they age. Technologies often derided as encouraging narcissism and other antisocial behaviour are instead being used for political activism. Young people are demanding a seat the table on a diverse set of issues: house prices, marriage equality, insecure work and pill testing among them, and reactionary calls for the young to stay in their lane are simply adding fuel to the fire.

But the game-changer has been the School Strikes 4 Climate (SS4C) movement, a response to successive governments’ inaction on climate change. Founded by then 15 year old activist Greta Thunberg in Sweden, SS4C has since gone global, with chapters of high school pupils organising strikes during school hours in their home countries and cities to demand leadership on the climate catastrophe.

Australia has been one of the hotbeds of the SS4C phenomenon. On November 30th 2018, an estimated 15,000 students marched in different locations across the nation, including Sydney’s Martin Place, the Melbourne CBD and over 20 other cities and regional centres. Since then, two other national marches have taken place, with a third protest scheduled for May 18th, the day Australians will be casting their vote on the next federal government.

The students are demanding three specific actions from the Australian government: to nix the Adani coal mine, to prevent any new coal, oil and gas projects, and to make Australia 100% powered by renewable energy by 2030. As the election heats up, the SS4C protests have increasingly targeted the offices of Coalition and ALP MPs, a development that has invigorated progressives and incensed members of the right-wing commentariat. 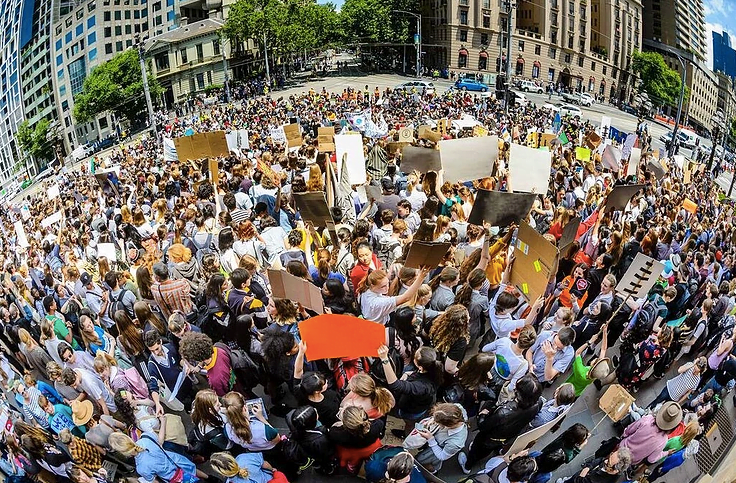 Last month, NENA’s Managing Editor Jacob Debets caught up with two of SS4C’s organisers to talk about the movement, its impact and future, and their personal experiences at the coalface of political activism.

Sampson McCracken is 15 years old and attends the Aranmore Catholic College in Perth, WA, and 14 year old Maanha Manzur attends Harrison School in Canberra, ACT. Both became involved in the SS4C movement after being invited by friends to attend some of the preliminary meetings in late 2018, and were instrumental in organising successive strikes in their home states.

McCracken and Manzur each describe their knowledge of climate change before their SS4C initiation as relatively basic. Manzur ‘knew the word’ and that Bangladesh – her parents’ birth country – was at high risk of its effects as a low-lying country. Meanwhile, McCracken was self-educated on the subject from reading The Guardian and other publications’ articles online. The vague sense of apprehension they felt regarding the Earth’s future quickly intensified into a sense of urgency after the SS4C movement began gaining momentum globally, and when the call to action came in their own states and schools, they answered.

Since that time, McCracken and Manzur admit that things have been a bit of a blur. In between the normal trappings of high school, like assignments and exams, they’ve been running off to meetings with public figures, perfecting speeches, organising land-use permits and navigating interactions with the media. SS4C use the messaging software Slack to coordinate across Australia and their own states, and there are always decisions and debates happening about what the next step should be.

“How it works is that there are separate channels” McCracken explained. “The biggest [channel] is the national one, then it goes into smaller ones – one for WA, New South Wales, Victoria. Then there’s a logistics team and a media team.”

“[Getting involved] meant showing up to calls, having a say in what [the organisation] was going to do, putting posters up…” McCracken continued. “All the final decisions are made by students, but we do have a few adult supporters. We can’t do everything ourselves, even though we’d love to.”

It’s a pretty steep learning curve for kids who are still years off the legal drinking or voting age, but to underestimate their intelligence, ambition or maturity would be foolish, to put it mildly.

“I think generally speaking, [people] are fine with seeing young people rise up,” McCracken said of the response he’s seen to the SS4C movement, though he also noted that the SS4C website had been blocked in state schools. “I feel like a lot of the [SS4C opponents] are connected with the mining industry. People in the state or federal government definitely have connections to the mining industry. If we succeed, they will lose money. The mining industry will have to get their act together and be more environmentally friendly. Also I think it’s partly politically motivated. Lots of these people probably don’t even think climate change is a threat.”

“I did have a few teachers who were very supportive” Manzur said of her experience. “No one was really against it, but I think the deputy general [of Harrison School] released a statement saying that we can't actively promote school strike. So that stopped teachers from publicly supporting it. Except my science teacher, my science teacher was like, ‘Go to the strike.’”

One of SS4C’s most remarkable features is how effectively its organisers have been able to mobilise, prompting some right-wing figures to speculate they have been assisted by, if not outright controlled, by members of the Australian Greens and “environmental fundamentalists”. These are  charges laughed off by McCracken and Manzur, who point out that all decisions are made by students and that social media helps overcome barriers that would have stumped previous generations of young activists.

“Obviously, we are naturally allied with [the] Greens” Manzur said, “But this isn’t about politics. I have had a lot of questions asking if we are politically led, or what party [we] support, and I answer [that we] really don’t care…. Climate justice transcends politics. Politicians talk about the importance of education and they shouldn’t be surprised when we connect the climate dots. We don’t care if about political parties, we just want to a future.”

“[Something like this] should have happened 40 years ago when we first found out about climate change, but we’ve done nothing” McCracken said. “I guess it’s just gotten to the point where the fear and the anger have just boiled over. Social media also helps a lot with coordination. It would have been a lot harder [to organise strikes on this scale] 10 or 15 years ago, when social media was less prominent and it was just harder to communicate without being there in person.”

Both McCracken and Manzur are excited about the impact that SS4C is having, but expressed caution when asked whether they see the movement evolving from its grassroots into a more formal institution. Manzur also pointed out that indigenous Australians are often left out of the conversation on climate, which is not a sustainable status quo moving forward.

“Obviously, we want people to join us” Manzur said. “But we also don't want to lose sight of our goals, which is a risk as the movement gets bigger.”

“The other thing I need to point out, because I think it's actually very important, is that Aboriginal, our indigenous people are actually on the front lines of Australia's climate crisis” Manzur said. But, we never see them in the media. We don't see them, they are hidden from the world and I don't understand why. That needs to change.”

One thing that is not contentious is that the SS4C movement is changing perceptions about young people in a positive way. McCracken and Manzur both hope that this might boost calls to lower the legal voting age so that 16 year olds are given the option to vote, before being required to at 18.

“Yeah I definitely think it does [challenge perceptions]” McCracken said. “They said the same thing about your [the editor’s] generation, about millennials being self-centred and all that. I think this does help break that notion. The older generations, no matter what we do, will always be critical of us. And I hope when we’re older, we won’t be critical of the generation below us.”

Ultimately, Manzur, McCracken and thousands of their peers expect that the fight for a sustainable future has just begun, and are gearing up for battle both on election day and beyond.

“The government is elected to have our best interests at heart and to lead the nation to a sustainable future” Manzur said. “So far they have failed us terribly, and that is why we have taken it to the street. We are marching literally for our futures, for our lives.” 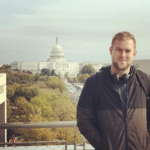 Jacob is a lawyer and writer from Melbourne. He holds a Juris Doctor from Melbourne Law school and a BA in Criminology from the University of Melbourne. He writes about a wide and constantly expanding range of topics, including the commoditisation of Australia’s higher education system and labour issues in combat sports.

See all articles by Jacob Debets