It’s a sign of the times. Government purses around the world have flung open with reckless abandon and the cash is flowing. Stimulus, baby!

A radical economic idea (as far as a thing can be radical in unradical times) has been getting around of late, by the name of Modern Monetary Theory. In the new paradigm in which governments give freely to those in need, its precepts can help us usefully filter and process this brave new world

AOC is into it, so is Bernie. It probably wears a beret. Comrades, it's even hitting the mainstream. It’s been mentioned in the Australian Financial Review. The New York Times said it “makes sense, to a point”.

The idea is simple to explain but difficult to understand. The easy part is almost childish — if governments, in theory, have the ability through reserve or central banks to just magic more money into existence, why don’t they? Would that not solve a lot of problems? To the extent that a nation can issue its own currency, it should always have the means to pay for services (i.e. by funding jobs) and meet its debt obligations (provided the debt is in the same currency). The Robin Hood of tax the rich and give to the poor is replaced by its more swaggering cousin, Magic Money Merlin.

Economics 101 rudely intrudes: but doesn’t printing money lead to *gasp* inflation? Maybe, but there are effective means of controlling that, say the Modern Monetary Theorists. Firstly, they argue, inflation is caused less by demand outstripping supply, as happens when people have a lot of available money – the position of mainstream economists – and more by the natural gravity of the profit imperative pushing prices upwards. This causes people to spend more to purchase goods and services, causing inflation. Effective regulation of the market, therefore, should help remedy that.

Secondly, a new approach to credit and lending is suggested – one that de-emphasises heavy gearing (lending where the loaned amount is much greater than the collateral or security offered to protect the loan) and commercial finance, the biggest causes of the Global Financial Crisis and many other economic tantrums besides. And thirdly, taxation in moderation  used as a tool to drive down demand rather than just to fund government spending.

Inflation is also not the bete noire it is often made out to be. Quite apart from anything else, too much employment can increase inflationary pressure (more people with more money), and what to us might seem like unacceptable levels of joblessness have been treated as normal, if not encouraged, because of this. The cultivated expectation of just what is a normal and therefore acceptable level of unemployment has been steadily rising over the past several decades — and deliberately so.

Modern Monetary Theory, in a plurality of forms, comes with a jobs guarantee: a guarantee that everyone who wants to work can. A modern monetary government in large part distributes new (magic) money into the economy by paying wages to workers who would otherwise be drawing on unemployment benefits. Infrastructure and development benefit from this too.

It’s a topic for a skilled pen elsewhere, but unemployment for the purpose of controlling inflation – the effects of which are most clearly seen in significant corporate accumulations of capital – is a recipe that, in a word, stinks. Try explaining to an unemployed worker that their country needs them to subsist on miserly benefits so that, what – corporations can be more assured of the future cost of goods and services? Not for me.

But throwing money at people and businesses affected by the Coronavirus may be fine for today, but what about the future? What about the deficit?

Ah, the deficit. Capital ‘D’, picture on the mantelpiece, get-you-in-your-sleep deficit. It’s said that it is easier for a camel to pass through the eye of a needle than for a deficit to enter into the Kingdom of Heaven. Everyone has been taught for so long to hate it, despite what a lot of economists have had to say. Modern Monetary Theory reimagines the devil deficit as a secret soldier in aid of the righteous.

A deficit on the government side of the ledger necessarily means a surplus somewhere else, as it must be some combination of money originally spent by the government (i.e., new money) and money not captured by taxation and thus still circulating around in the public space. The contrary is, of course, also true: government surpluses simply mean the government is hoarding money that it has taken from the public. Classical economics makes deficits an issue to the extent that they risk the government’s ability to meet their debt obligations. As to that, see above. Print money, control inflation, apply regulation and taxation to ensure a healthy distribution.

One of my favourite memes of the global breakdown has been “the Line”: an anthropomorphism of the market index value, and the numbers, graphs and hysterical pundits that flood our news feeds with constant updates, despite the fact that it directly touches the lives of so few.

The Line is hungry and demands a human sacrifice! – a refrain demanding the reopening of businesses, despite the potential for harm, as a means to vitalise the economy. Very funny; deadly serious.

The Line is pleased when tax cuts or other market-boon measures are legislated. Très drôle.

Well, the Line all around the world was very pleased at the announcement of the many stimulus packages we’ve seen rolled out over the past few weeks. International markets roared like an engine screaming into life and the fast car markets were back. It turns out that private capital may like the Magic Money Merlin after all. And why wouldn’t it? Dollars always seem inevitably to evaporate to higher climes.

The markets are up, those temporarily (or permanently) unemployed have something in their pocket to live on, and that’s all money that will be tipped straight back into the economy. If everything comes out in the wash, you might just find a few clean, new bank notes in your pocket.

What is this other than a grand use case for Modern Monetary Theory? Those who need are receiving (generally, albeit not perfectly). The deficit has been brought to arms spectacularly and immediately a fog was cleared for many who were unable to see a path to the end.

So don’t ever let anyone convince you that we can’t provide for and support those in need. Never, ever again. 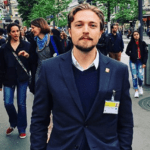 Scott Colvin is an internationally-acclaimed writer and lawyer based in Melbourne. His award-winning work has appeared in The Sydney Morning Herald, The Australian Financial Review, The Huffington Post, and a variety of other national and international publications. Scott writes on culture, politics and the economy and may be found on twitter: @SKJColvin

See all articles by Scott Colvin

2 Replies to “Wait, can we just print money to solve financial need?”