How is this New Economy? In this article, Godfrey Moase discusses the union-led launch of a new energy co-operative, Cooperative Power, which seeks to help build an ecosystem organisations supporting sustainable energy production and consumption.

Radical Brazilian educator Paulo Freire posed the question, “What can we do today so that tomorrow we can do what we are unable to do today?” When it comes to the daunting task of building a new economy, of organising people to take ownership over our workplaces, public utilities and our society more broadly, this question gets to the heart of the practical daily actions that can unfold greater possibilities for tomorrow. Given there are only around 3,800 tomorrows from which to take the transformative action necessary to avoid climate catastrophe, this is also a question that comes with some urgency.

When it comes to democratic-ownership and climate action, Cooperative Power is an initiative that attempts to make far more possible tomorrow than it is today. It is a newly formed co-operative for Australia’s energy sector that aims to take the power back from huge energy corporations, for the benefit of people and our planet. It’s a new way for people to buy energy and have a say in how it’s created and how much it costs.

The initiative was founded and led by the National Union of Workers, and it started with winning a New Energy Jobs grant from the Victorian government in late 2015. The result was a feasibility study into the concept undertaken by the Institute of Sustainable Futures at the UTS. Since that study a number of unions, environment and community groups have joined together as members to form Cooperative Power including:

The idea is that the living members of a diverse range of organisations who are affiliated with Cooperative Power can access electricity without having to go through a traditional corporate retailer. This helps to bolster democratic membership-based structures, take corporate profit out of the retailing end of the electricity system, and then reinvest that surplus up the supply-chain into energy efficiency measures and community renewable generation.

We have followed the recommendations from the aforementioned feasibility study and set up a retail product partnership with a social enterprise retailer called Energy Locals. Cooperative Power, therefore, in its first phase is acting as a collective bargaining unit for community groups to engage with more socially-branded retailers who offer retail product partnerships. It is the application of the values of cooperation, solidarity and community to the present context of privatised electricity retailing and ethical consumerism. From the repeating and unfolding of this process, however, far more becomes possible, including a renewable energy-powered future.

Our vision is to have a socially and community-owned retailer that invests in and purchases community renewable energy, and subsidises the roll out of energy efficiency improvements as well as renewable energy infrastructure for working-class households. No one, and no community should be left behind by the transition.

Ideally, Cooperative Power can act as a keystone in the bridge that is the transition between the world as it is today, and the world as we need it tomorrow. The keystone is a small and often missed but ultimately necessary part of a stone arch bridge that supports everything else coming together. Once the journey is over, in the future people may look back at these times and miss this one small institution amongst the diversity of other community groups, cooperatives and unions that Cooperative Power had a role in supporting. So be it. Cooperative Power should be judged on how it takes profit from the sales and marketing end of the electricity sector and reinvests it in building up a proper standalone retailer, facilitating group buying of products such as Earthworker’s solar hot water heaters, and enabling community energy generation to get off the ground.

A vision is one thing, however day to day realities are another. No idea, no matter its merits, can escape the need to navigate real world obstacles. Cooperative Power is designed to sit at the intersection of a number of social movements but an intersection only has meaning in so far as people actively traverse it. Inertia is the single biggest obstacle to Cooperative Power’s success.

Inertia, in this case, takes many forms. There is the inertia-bound to an artificial electricity market highly-regulated in favour of established corporate actors. Energy Locals, for instance, only recently received a retailing license in Victoria and is yet to have an offer for the Victorian market (at the time of writing it is expected any day now). There is the inertia that ties existing people to their corporate electricity retailer. Moreover, there is the inertia and conservatism that teaches social movement leaders to stay in their own lane rather than reaching out to build wide relationships of power. Breaking through the force that the status quo holds over people and institutions requires energy and focus.

We believe it is possible to overcome our obstacles. Union workers, and regional communities are crying out for an alternative to the status quo. It is up to us to be good enough to rise to the occasion. If you’re part of a co-operative, community group or union who would like to join Cooperative Power then we encourage you to reach out to us. 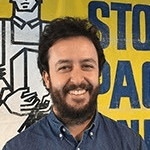 Godfrey Moase is Assistant General Branch Secretary at the National Union of Workers and co-founder of Cooperative Power. He can be found on twitter @gemoase.

See all articles by Godfrey Moase