Both were motivated to undertake their work following projects they did in rural areas, which exposed them to the reality of poverty for many East Timorese. They perceived the threat of intergenerational poverty and came to the conclusion that collective action at the grass roots level was absolutely necessary.

Elsa Pinto, in her opening comments, noted that the East Timorese economy depends on subsistence farming and that most rural communities do not have access to markets. Neighbours in rural communities can only limitedly purchase goods from one another, and so it is necessary to transport produce to Dili, the East Timorese capital, to access customers. The cost of transporting produce is prohibitive, however.

She said she uncovered a co-operative history in the rural regions. Following the 1975 Indonesian invasion of East Timor, she said, people came together to do collective farming in order to share and support those on the front lines of the East Timorese independence struggle. Indeed, she said, it was such farming co-operatives which allowed the struggle to be sustained.

But recently, said Pinto, East Timor has become dependent on foreign foods, not only impacting domestic production but leading to poor health outcomes – “we are a poor country but we have rich country diseases”, she said – high blood pressure and heart attacks, for example.

Setting up a credit union

Lanu de Sousa agreed with challenges regarding access. His enclave, he said, is off the mainland and so also faced transportation problems. The community needed to get together to make themselves heard by the central government regarding their development.

That was how the credit union got started. He was organising meetings to discuss how the community could advocate to the government, but found that, without a material reason to attend, people always find other things to do. So he started the savings and loans co-operative. People agreed to join as members, and were motivated to come to periodic meetings to engage in collective management of their funds.

He described how they wrote their own constitution – they wrote what they wanted for themselves, without trying to copy pre-existing models – “and then”, he said, “that becomes our law, our regulation”. The credit union has been going for 4 years, has grown from 15 founding members to over 300 households. He speaks of members not as individuals – but as households. It is very much a family arrangement, he emphasised. The credit union now has over $400,000 dollars saved, and member-households can loan between $300-$11,500 at a time.

He says this has been of great benefit to the community. Under East Timorese traditions, he said, people have a number of duties and obligations which may require money at short notice. He said this often led to people borrowing at high rates of interest and remaining poor. But with the credit union – member-households are obliged to contribute $10 each month, at least – they are able to access finance when needed and now have also been able to increase their savings, contributing to net increases in household wealth.

People used to dream about opening a small business, buying some land or buying a car, he said, and now, with the low interest loans, they are able to realise them. And this all done with minimal bureaucracy: “One form – you fill it out today you get the money today”.

He believes with the positive change they’ve achieved so far, the organisation will keep going.

Elsa Pinto then went into some detail about the farming co-operative she was involved with. It was started in 2016 in a remote area in the eastern part of the island as a multi-stakeholder co-operative, including five customer members (Elsa and some of her friends) and six farmer-members.

The idea was to provide access to markets for the farmers. Transportation links with Dili are poor so transportation costs high and, in any case, farmers didn’t have many contacts in the city nor places to stay if they brought their produce there. So they pooled their money for the transportation costs, had it delivered to Elsa and friends, who then sold it on to friends of theirs – instead of rice imported from Vietnam, they were finally getting domestically produced rice.

The project ran for two years and was successful, with more farmers coming on board. The project has had to be suspended, however. The road construction works linking Dili with eastern rural communities meant the rice became covered in dust on its route over. Sometimes when it arrived off the truck they had to ask – “is this even rice!?” So they said, “when the road is ready, we’ll do this again”.

The role of women in East Timorese co-operatives

Elsa Pinto did some research in 2014 which found that woman play an important role in the functioning of co-operatives. This is both in terms of its operation, and in spreading the news – “I’m in a co-operative; this is what happened to me; you should go and join” etc etc. Women are excellent at this kind of gossip, said Pinto. Credit unions especially, she said, were also helping women gain confidence and a voice in household affairs, effecting what is often an imbalance in power between male breadwinner and female household manager. Women were setting up co-operatives just for women, and one can really tell, says Pinto, the change in confidence from co-op involvement. 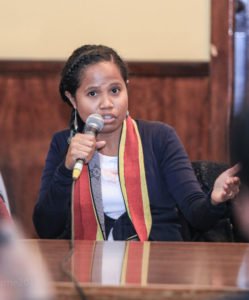 Lanu de Sousa agreed. That was why, as he mentioned earlier, their credit union doesn’t count individual members but households. Every month the whole family comes to the monthly meeting, children are running around, adults are meeting and gossiping. This, he says, builds solidarity. But also, because they target household participation, they require both partners in a relationship to agree on loan and savings arrangements between themselves. This encourages a process of negotiation between the two, regarding how much to save for school fees, how much to spend on food etc.

Robyn Donnelly, academic and former Legal Manager in the NSW Registry of Co-operatives, attended the event and asked an interesting question about government regulation of co-ops.

She said that it was marvellous to hear grassroots organisations starting up in a newly independent nation like East Timor. She loved hearing about how de Sousa’s credit union constitution was written and how they are organising themselves completely freely. In Australia, she said, we’re overregulated in terms of those sorts of things – starting a credit union in Australia is something you did in the 1950s. Because of all the rules and prudential standards in place she thinks this is unlikely to happen again here. Her question for Pinto and de Sousa was what role they see for the government in supporting co-operatives in East Timor? Was de Sousa, in particular, worried about government intervening with the credit union over the risk of loan defaults?

De Sousa said that “the question scares me”, repeating this a few times. At the moment the government was not intervening, but exactly that question was of concern for the co-operative. They said they were always very conscious of risk – that one cent could potentially bring the whole thing down. They are steadily increasing capital and household-members so they are taking great care.

Similarly Pinto expressed concern about government involvement. There is a secretary of state for co-operatives in East Timor, she said, with laws regulating co-ops. In 2002, in fact, it was included as an economic development sector alongside the public and private sector. From 2015, the government has started to interfere too much though. Government funding, she found, instead of making co-operatives stronger, were killing them. This is why co-operatives have the principles of self-help, independence from government, and democracy. Government funding for co-ops, she found, was badly managed. People found out money was available, would set up pretend-co-operatives, would take the money and then leave. She thinks that government should provide regulation and training, but remarked that she is scared about what the government will do with the $1.4 million it has earmarked for the co-op sector this year.

It was fascinating to hear about the development of a new co-operative movement in East Timor. As intimated by Robyn Donnelly, one can only find similar stories from Australia in Gary Lewis’ books about the history of Australian co-operatives – the stories of organic community, solidarity, vision and self-help. I do not think the recent history or contemporary situation of East Timorese co-operatives is well-documented other than, perhaps, the coffee-farmer co-operatives. It was therefore a pleasure to get some insight. It will be interesting to see what develops! 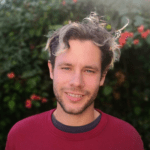 Duncan is a PhD student at Monash Law School, where he researches the history and philosophy of corporate legal personality. He has graduate qualifications in economics and law, and his BA was in metaphysics. He has worked as a co-operative enterprise consultant and for the Business Council of Co-operatives and Mutuals, and has tutored in Trusts Law and Aboriginal Cultural Studies.

See all articles by Duncan Wallace