Journal / Issues / Volume 1 / Volume 1, Issue 8 / An Open Letter to the Administrators of the Co-op Bookshop

By Take Back Our Co-op

This letter is written in the light of news the Co-op Bookshop, a co-operative over 60 years old, has gone into voluntary administration due to debts owed to suppliers. It is possible the Co-op Bookshop will cease trading.

Dear administrators of the Co-op,

The Co-op Bookshop is a special kind of business – a co-operative, owned by its customers (who are its members). It exists for the benefit of its customer members. Its purpose is to facilitate access to textbooks for students.

That was why the Co-op was established. In 1958, two students at the University of Sydney began bulk-buying and selling textbooks at low prices out of a garage. The co-operative structure was used so that the students who bought the textbooks could retain democratic control of the organisation.

The co-operative structure also means that the Board of Directors of the Coop have a fiduciary duty to act in the best interests of its customer members.

Over the last two decades the purpose of the Co-op has been subverted and a serious argument could be made the Board of Directors have acted in breach of their duties.

This is most clearly shown in an interview with CEO Magazine, given in May 2019 by the board-appointed CEO of the Co-op, Thorsten Wichtendahl.

Wichtendahl was speaking about the purchase of Australian Geographic stores in 2016, which, incidentally, was possibly a breach of the Co-op board’s legal duties first to put the decision to members in the form of a special resolution.

He stated that, “The key achievement since bringing the two brands together is doubling our profit for three years in a row”. “We are keen”, he said, “to increase our profitability more than anything.” “The aim is to double group profit again in 2019”, CEO Magazine reported.

This is a serious breach of duties. The aim of a consumer co-operative such as the Co-op is to benefit its customers – it is not to maximise profits.

In the interview Wichtenstahl gave, the members of the Co-op are not mentioned once. He refers more generally to “consumers” but doesn’t differentiate member customers from non-members.

The business practices required to successfully run a co-operative business are different to those required for running a listed company. There is a need to focus on members; to include them in the governance; to encourage a communal feeling.

The Co-op has now gone into administration, owing close to $13 million to suppliers. The reason it has failed is because the wrong business practices have been applied.

It is not farfetched to suggest, given the Co-op has annual revenues of more than $100 million, that even now, if the Co-op is run using responsible co-operative business practices, the business could still be saved, and suppliers fully recompensed.

What is necessary if this is to occur is that the current board of directors are removed and a new board voted in by members at an open, accessible, special general meeting.

The mismanagement of the Co-op has not occurred without protest from members. Over the last four years, the Take Back Our Co-op campaign has been making attempts to exercise basic membership rights. This includes the right to attend and vote at the Annual General Meeting.

This basic right has been blocked by the current board, who have now almost bankrupted the business. They have held the AGM in far flung places, well away from locations where most members live. For example, rather than holding the AGM near the Co-op’s headquarters in Surry Hills, Sydney, the Co-op in 2017 held it 100km away in Wyong. Nevertheless, a contingent of over 30 students, holding dozens of proxies, managed to attend.

Members were told, however, that the proxies were invalid, and no reasons were given for why. Using their own proxies (apparently valid), the board outvoted members.

The 2018 AGM was held even further away, making attendance by more than a cursory number of members impossible.

The fact that board intransigence towards members is no recent phenomenon, and is perhaps two decades old, is detailed in a piece of investigative journalism, ‘Beer Not Books (or, the Unco-operative Bookshop)’, published in Farrago in 2016.

That is what has occurred with the Co-op. The board is responsible, and the responsible response would be to replace them with a new board which can appropriately manage the business and trade the business out of trouble.

One example is the Harvard & MIT Co-op Bookshop. A hugely successful institution, it actively encourages students to act as board members. Advertised in a large poster at the front of the shop, in 2018 the Co-op asked students to “Get on Board! Real Business; Real Decisions; Real Experience”. It listed the 13 students who were acting members of the board for the following year. That is the reason it is successful: it is open and democratic. See below pictures.

The Co-op Bookshop, back in Australia, is a very important organisation, over 60 years old. Many generations of Australians know it and are members of it. It would be a tragedy for it to exit now.

If there is a chance the business can continue with a new, democratically elected board, it must be taken.

Take Back Our Co-op 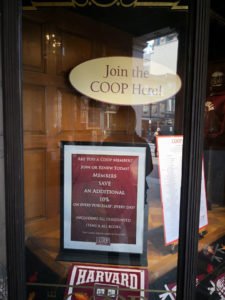